Rahul Kanakia shall now celebrate the release of his debut, ENTER TITLE HERE, by interviewing himself 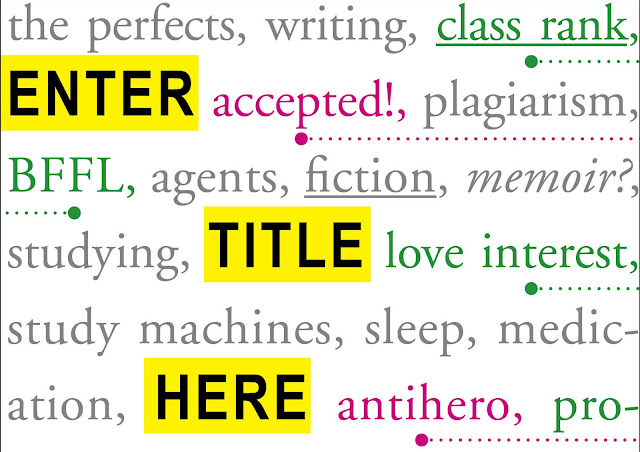 Congratulations to Rahul Kanakia, whose debut novel Enter Title Here, released yesterday. This is a great novel. A fantastic novel, really. It's gotten a ton of good feedback for it's, like, metatextuality and its strong voice. Everybody loves it. Pay no attention to the man behind the blog post. He's obviously completely impartial.

I’m your protagonist—Reshma Kapoor—and if you have the free time to read this book, then you’re probably nothing like me.
Reshma is a college counselor’s dream. She’s the top-ranked senior at her ultra-competitive Silicon Valley high school, with a spotless academic record and a long roster of extracurriculars. But there are plenty of perfect students in the country, and if Reshma wants to get into Stanford, and into med school after that, she needs the hook to beat them all.

What's a habitual over-achiever to do? Land herself a literary agent, of course. Which is exactly what Reshma does after agent Linda Montrose spots an article she wrote for Huffington Post. Linda wants to represent Reshma, and, with her new agent's help scoring a book deal, Reshma knows she’ll finally have the key to Stanford.

But she’s convinced no one would want to read a novel about a study machine like her. To make herself a more relatable protagonist, she must start doing all the regular American girl stuff she normally ignores. For starters, she has to make a friend, then get a boyfriend. And she's already planned the perfect ending: after struggling for three hundred pages with her own perfectionism, Reshma will learn that meaningful relationships can be more important than success—a character arc librarians and critics alike will enjoy.

Of course, even with a mastermind like Reshma in charge, things can’t always go as planned. And when the valedictorian spot begins to slip from her grasp, she’ll have to decide just how far she’ll go for that satisfying ending. (Note: It’s pretty far.)

The Reviews
Kanakia’s mordantly funny story of an overachiever who takes “write what you know” to new extremes will give college-bound readers (and their parents) a gentle wake-up call that success can come in a variety of forms.
--Publisher's Weekly


Rahul Kanakia’s debut is a definitive metafiction experience. Readers will question whether Reshma is a satirical antihero who reflects today’s convoluted race relations, education system and need for fame, or simply a teen who wants acceptance and love. Readers may not always like Reshma, but they won’t forget her story.
--Bookpage

An outrageous girl who’s selfish, smart, and thought-provoking! Reshma is socially terrifying and easily the most unlikable character we’ve ever ended up rooting for, but her brutal honesty also happens to be LOL hilarious. The great characters, perfect plot, and social commentary make this one a fresh read.
--Justine Magazine


The Interview
Q: Where did you get the inspiration for your book?

I got the idea from the book in the summer of 2012, when I was reading an article about Korean students who were protesting in the streets about their high workload. As they protested, they’d shout, “We are not study machines.” I loved that,  I thought it was such an evocative phrase. And I thought about writing a dystopian novel about a world where everyone had to study really hard. Except then, as I was thinking about it, I realized that there was no need for the dystopia, since, for many students, we already live in that world. So I decided to write a story from the point of view of a “study machine”: a person who worked really hard in school and had zero life. I wanted my book to be full and fair and to try to capture the things that might drive a person to work like that and to, in some way, evoke some kind of respect for that person.

Q: Describe your writing process, from idea to final draft.
I don't really have one? I've tried for years to settle down to some routine, but it's never quite worked out. Every book ends up coming out different. Sometimes I outline and sometimes not. Sometimes I write it all and feel like the first draft is perfect, other times I need to make a thousand tiny and large revisions before it's at all readable.


Q: Tell us about your journey, from finding an agent to publication.
I placed second in this contest, the Tu Books New Visions Contest, and the winner, Valynne Maetani, is/was the most gracious person on earth, and she put me in touch with her agent, John Cusick (now at Folio). The novel that placed second in the contest didn't sell, but in the meantime I'd written this one. John loved it. We did some revisions. He sent it out. The book went to auction, and eventually sold to Disney. Three months later, my editor at Disney left to take another job! I was in editor limbo for about nine months, which eventually led to my book being pushed from 2015 to 2016. However the editor I ended up with, Kieran Viola, loved the book and both gave great feedback and has been a great advocate for it. So not everything is a disaster all the time!


Q: Why would someone want to buy your book?
Really I think they'd want to read it because the protagonist is unlike anyone else you've ever read. She's not charming. She's not quirky. She's not fun. She's bold and merciless. She doesn't even like to read books! What kind of YA protagonist doesn't like to read books. But no, she thinks they're a waste of time. She's every girl you hate in high school, but come to secretly respect ten or twenty years later.


Q: What are your favorite books? What are you reading now?
Right now I'm reading Bonjour Tristesse, which is a French novel, by Francoise Sagan. The book was a phenomenon when it came out in 1954, and it made a celebrity of its eighteen year old author. It's about a daughter and a father who live on the seaside in an air of dissipation and casual love--both carry on multiple affairs--until finally he gets engaged to a woman his own age who threatens to shut down the party. I'm not finished with the book yes, but I'm pretty sure the girl, Cecile, is gonna have something to say about this...

The other, very similar, book I've recently read is Marguerite Duras' The Lover. This is one of those novels that sounds both uninteresting and possibly skeevy when you describe it. The book is about a fifteen year old white girl in colonial Vietnam, in the 30s, who has an affair with a very wealthy thirtysomething Chinese man. The book is about this girl’s sexual awakening: her realization that as a woman she has a power that both enlarges and reduces her. And it’s just very…complex. Because she is a colonizer. In this land in which she has lived for her whole life, but which isn’t really hers, the color of her skin makes her in some way ineluctably superior to this much-older man.

I cannot recommend The Lover enough. It's an unbelievably subtle book. I haven't even mentioned the way that time and point of view shift and wrap around on themselves, creating a much fuller picture of the past and future life of this girl.

Anyway, that is what I have.

Check out Enter Title Here on Amazon, B&N, Indiebound, and Goodreads. And if you're interested in me, you can check out my Website, Blog, or Twitter.