Happy book birthday to Jessica Cluess! Her debut, A SHADOW BRIGHT AND BURNING, is out today. 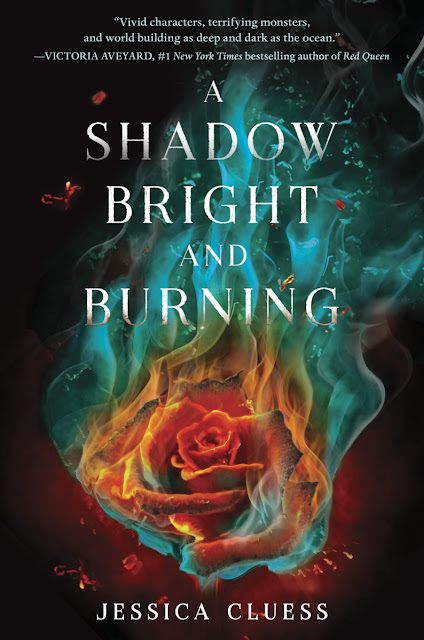 Today is Jess's release day! Her tale of a Victorian era England beset by demons has drawn rave reviews for its world-building, fast-paced plot, and emotional intensity.

The Story
Henrietta Howel can burst into flames. When she is brought to London to train with Her Majesty's sorcerers, she meets her fellow sorcerer trainees, young men eager to test her powers and her heart. One will challenge her. One will fight for her. One will betray her. As Henrietta discovers the secrets hiding behind the glamour of sorcerer life, she begins to doubt that she's the true prophesied one. With battle looming, how much will she risk to save the city--and the one she loves?


"Unputdownable. I loved the monsters, the magic, and the teen warriors who are their world's best hope!"
—Tamora Pierce, #1 New York Times bestselling author


"The magic! The intrigue! The guys! We were sucked into this monster-ridden, alternative England from page one. Henrietta is literally a 'girl on fire' and this team of sorcerers training for battle had a pinch of Potter blended with a drop of [Cassandra Clare's] Infernal Devices."
—Justine Magazine


"Pure enchantment. I love how Cluess turned the 'chosen one' archetype on its head. With the emotional intensity of my favorite fantasy books, this is the kind of story that makes you forget yourself."
—Roshani Chokshi, New York Times bestselling author of The Star-Touched Queen


"A glorious, fast-paced romp of an adventure. Jessica Cluess has built her story out of my favorite ingredients: sorcery, demons, romance, and danger."
—Kelly Link, author of Pretty Monster

Q: Where did you get the inspiration for your book?
Nicholas Nickleby by Charles Dickens. I was thinking about the scene where Nicholas physically stops an assault on a helpless boy, and wondered how that act would work if his gender was flipped. So I imagined a girl in Victorian dress doing things like throwing a rock or grabbing a knife, and then had an image of her opening her hands and shooting fire out of her palms. That image of Victorian girl wielding magical fire was the spark I needed to get started.

Q:Describe your writing process, from idea to final draft.
I tend to write a very rough outline, no more than two single spaced pages. I get the bare bones in place, like the catalyst, the mid point, the darkest moment, etc., and then I write. I usually need three drafts and a polish before the book’s ready to go to readers. Once I give the book to my CPs, I wait for the notes, and then see if multiple people have made the same complaint. If they have, I fix it right away. If the book’s especially tricky, I might get a new batch of readers to look over the new version. Then, after a polish, I’m usually done.

Q: Tell us about your journey, from finding an agent to publication.
I found my agent on twitter during #MSWL. I got lucky, because he offered a week after I’d sent him my query letter. Short waits are very nice. After I signed, we spent several months passing the manuscript back and forth and editing and nitpicking. It seemed exhaustive at the time, but I’m glad we did that, because it made the book as tailor-ready for the market as possible. Once on submission, we had an offer in less than two weeks. It’s amazing how fast it all went, since I’d spent a year writing the book before querying it, and I’d spent two years writing another book before that that went nowhere. You never know when the lucky moment will strike.

Q: Why would someone want to buy your book?
Hopefully, because they want to be entertained! I love depth and nuance in the books I read and the stories I tell, but I really love it when something makes my heart pound. If you like girls battling horrible monsters with a side order of romance, there’s a good chance you’ll want to buy my book. That’s the dream!

Q: What are your favorite books? What are you reading now?
I love Jonathan Strange & Mr. Norrell by Susanna Clarke, Dune by Frank Herbert, Neverwhere by Neil Gaiman…honestly, the list goes on and on. I love every book I’ve read from a fellow debut this year, and it’s amazing to be surrounded by so much talent and kindness. 16 is a lucky number!
Newer Post Older Post